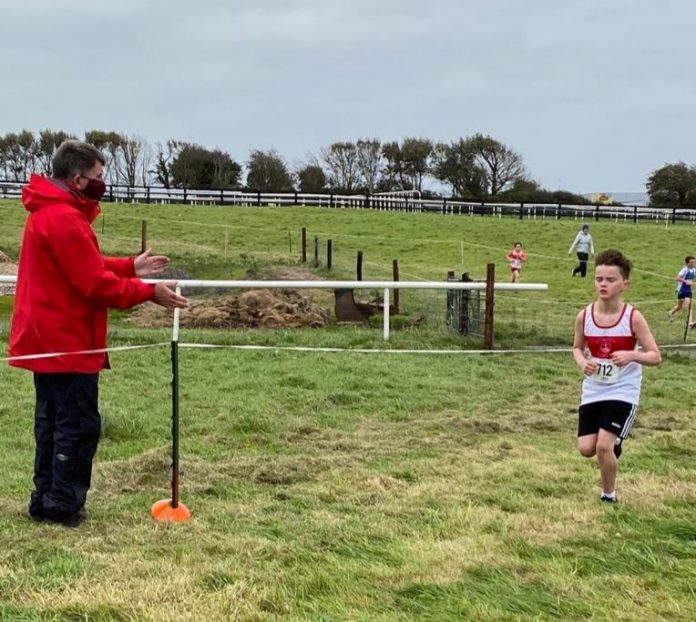 A busy and productive weekend with GCH Master athletes competing at the National Master Indoor Championships while some of our Juveniles were competing for their respective schools at the All Ireland Schools Cross Country Championships.

The All Ireland Schools Cross Country Championships were held on Saturday last in Clongowes College in Kildare, on a flat and fast course. A number of GCH athletes represented their respective Schools in the Junior, Intermediate and Senior Boys races. Many of Ireland’s most talented young athletes were racing, with some superb performances seen across the competitive eight race programme.

In the Senior boy’s race, Aaron Brennan representing Claregalway was best for Galway in 26th place. In the Inter Boys there were solid runs for Barry Murphy representing St Enda’s, and Eoghan Jennings representing Carraroe. Daragh Jennings, competing in the Junior Boys race was an excellent 13th place for Carraroe, and William McDonnell of St Joseph’s Galway was 29th. Full results link: https://www.athleticsireland.ie/schools/results

A terrific National Masters Indoors Championships were held last Sunday in Athlone IT. A number of GCH master athletes competed across many Track and Field events.

Majella Loftus continued her good run, as she struck gold in the Ladies O45 60m sprint with a pb of 8.82 seconds and won silver in the 200m with a pb of 29.17 seconds.  Niamh Hennelly took gold and bronze in the O35 1500 metres and 800m respectively, while Sinéad Foran won silver in 1500m and bronze at 800m in the O40 section. Jean O Connor took silver in the O35 800m behind Hennelly.  All four ladies made up the GCH 4x200m relay team which took bronze. Grainne Ni Uallachain finished just outside the v40 medals in fourth place in very a competitive women’s 3000 metres, with Mags Sheridan also finishing fourth in the 050 1500m.

The evergreen Martin McEvilly of GCH was on top form, as he claimed triple Gold at O70 level in the 800m, 1500m, and 3000m races, in an amazing display of stamina. Gerry Carty finished just outside the medals when finishing fourth in the men’s 045 3000 metres.

Jim Phelan surged to victory in the 400m, running a personal best of 55.21 in winning the O45 category, and took bronze in the 200m. Leo Brule and Killian Dooley had good run outs in the 200m and together with Jim Phelan and Seamus Lynch took well-deserved bronze in the 4×200 relay race, with Joe Hoade as sub completing the team.

In the Field events our throwers were in great form.  Brendan Staunton, Sean Breathnach and Linas Mitkas won triple Shot Putt gold for Galway City Harriers in the Over 35, 40 and 45 categories respectively. Breathnach was the top thrower on the day with a best throw of 16.74 metres, and later added Gold in the Senior Weight for distance event held alongside the Masters. Staunton and Mitkas also picked up silver medals in their Weight for distance categories. Richard O’Hanlon was also on form as he took Shot Putt silver and sprint bronze in the 60m, at 060 level. Great day out for GCH !

Jane Ann Meehan of GCH placed third in the Bohermeen half marathon held in Meath on Sunday last in windy conditions. Meehan clocked 1 hour 22 minutes, a solid run as she continues her marathon build up. At the Carra Classic over 8km in Mayo, Regina Casey had a convincing win, in a time of 29.26 minutes.

The 2019 Galway 5km series will open for entries online on Active. com at 8pm on Friday 22nd March.  There will be 700 online entries available for general sale and the price will remain at €30 for entry. The series will kick off in on April 30th in Caltra at 7.45pm, and as usual will be held over six consecutive Tuesdays with the grand finale in Kilcornan, Clarenbridge on June 4th.

October 22, 2020
Galway City Harriers are very disappointed that we cannot hold training sessions for our adult members under Level 5 Restrictions.  We have all been very...

Weekend Round up 9th/10th March